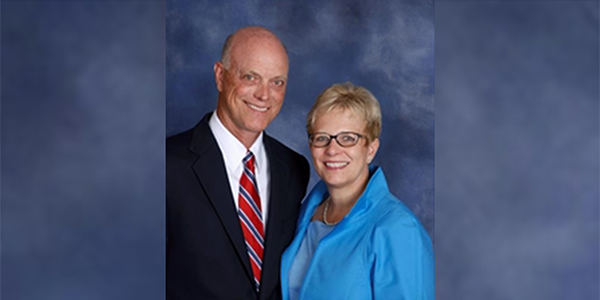 "Our Father, who art in heaven…" begins the familiar Lord's Prayer that Jesus taught us to pray. Perhaps living a life of a faith-filled disciple as a dedicated dad may be the highest form of this prayer, which is part of Mick's legacy. "I had three great male role models in my life - two grandfathers and my own father. It was a privilege watching and learning from them as I grew up." This influence would help shape the McClelland family future. After 16 years of working for GM, he and Sarah made the bold decision to sacrifice one income to allow Mick to be a stay-at-home father to their two sons.

Sarah remembers, "We were juggling two careers while raising the boys. When they started getting busy with other activities that we couldn't keep up with, we made the family decision for Mick to retire and stay home. It was scary for me because frankly I liked the two incomes and being the sole breadwinner was a big responsibility. But we felt the hand of God leading us and we now know God honored this decision."

When Birmingham First was located in downtown Birmingham, Mick's dad and grandparents walked to church. In 1944, Dr. Runkel became the senior pastor, and had children of the same generation as Mick's father. In those days, according to his dad, the city of Detroit always got the best ministers, so to get the quality of a leader like Dr. Runkel way out in Birmingham was unusual. Mick's dad said Dr. Runkel was the first regular guy he knew as a pastor because he knew how to throw a softball.

Mick was repeatedly told the story by his dad and grandparents that moving the church to Maple Road was not an easy decision, but his grandparents strongly supported the great vision articulated by the church leaders. At that time, Stanley Kresge, a long-time Methodist, desired the existing downtown church site for a new Kresge store. To help facilitate the church's move from downtown to Maple and Pleasant, Kresge offered to help the church build on the new property by providing a matching gift for the first $50k or $100k raised by the congregation.

In spite of his generational legacy of involvement at Birmingham First, Mick's first activity began as an obligation, when his mother insisted he join the choir. "I really didn't want to, but this was not debatable." Later, as an adult, he was active in the Wednesday basketball activities at Royal Oak Methodist Church when Dale Glick invited him to join a Bible study. Trying to use "church league" basketball as his excuse to not attend the Bible study finally failed - God's gentle persistence through Dale won the day. "It was during a particularly stressful time when I really needed God's love and grace, which brought me into a new level of faith in my relationship to God."

Giving and generosity have grown in their family in a similar way. At first an obligation, now "giving is a privilege and a reflection of the immeasurable blessings God has granted us. It is also liberating as it is a clear reminder to us that, truth be known, God owns it all anyway."

Together Mick and Sarah continue the legacy of giving modeled by his parents and grandparents. "My grandparents were very modest and humble givers. At the end of every year they would set aside a special gift, above their regular giving, and ask the pastor, 'what do you need?'" One year pew cushions showed up. In the 1990s, Mick's parents, given his mom Carol's passion and involvement in the music ministry, established the AM Music Fund in honor of their parents, and it continues to exist today.

Joe, the older McClelland son, continues the family legacy of faith as he lives out his vocation in service of Jesus Christ through his work at CRU, formally known as Campus Crusade for Christ. His younger brother Dan carries on the legacy of this overachieving couple after having completed his law degree and MBA from Tulane.

In his Sermon on the Mount, Jesus taught us to not worry, but to trust our Father to take care of us. "Leaving a gift in our estate plans felt natural for us. The church has been and is still is integral in our lives. Here we've experienced baptisms, funerals, and most importantly, the people we have known and those we know today, to be in this fellowship with God, our Father."