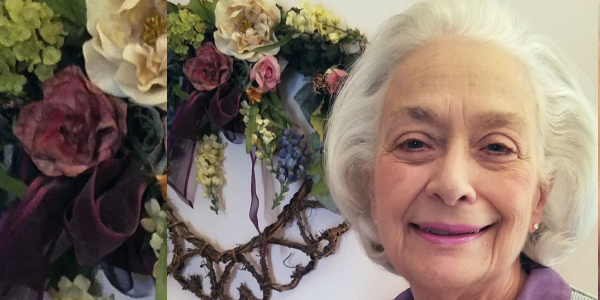 Joan and Dwight Benner met when Dwight helped Joan unload her car when she arrived at Garrett Evangelical Theological Seminary, where Dwight would earn his Master of Divinity Degree (and later a Doctor of Ministry Degree) and Joan would earn a Master of Arts Degree in Christian Education in a cooperative program with Northwestern University. Dwight served as a pastor in United Methodist Churches for 14 years and then earned a degree in computer information systems. It was Dwight's career change that brought Joan and Dwight to the Detroit area, where they joined our congregation in 1983.

Joan grew up in a small church in northern Michigan. After she graduated from college, Joan taught in the Grand Rapids area and joined Grand Rapids First United Methodist Church. When she went to GETS, Joan received funding support from an endowed fund at Grand Rapids First UMC. She knows firsthand how legacy giving can positively impact generations yet to come.

Joan worked at Birmingham First for twenty-six years, beginning as the computer coordinator and then working as the financial administrator. When asked what about her work was most fulfilling, Joan's response was, "seeing the faithfulness of our people." She continued, "the commitment our members have to faithfully support the work of God through the church is tremendous. It was not necessarily the size of the gifts, but the commitment behind each gift, and the consistency with which people offered their support."

In September 2015, Dwight Benner was killed tragically while he and Joan were traveling in the state of Washington. In the aftermath of this unimaginable tragedy, Joan was cared for by a host of people, including the local United Methodist church pastor. As Joan said, "I was cared for, loved, welcomed, and supported in ways that I could not have imagined. I really experienced church – this church and the wider church – when I needed it most."

In Dwight and Joan's estate plan, they committed 5% to Birmingham First and 5% to Garrett Evangelical Seminary. It's a commitment that Joan has affirmed in the aftermath of Dwight's death. Their commitment is a statement of faith in God and God's work through Birmingham First. Joan's hope for our church is that we will continue to change to meet the challenges of each new day. She is confident that "the church will be faithful to be at work in the world, where all people can participate, and we meet the needs of those who look to us."

Thanks be to God for Dwight and Joan and their faithfulness, yesterday, today, tomorrow, and into the future.